The Networked Politics of Feminist and lgbt Movements in Slovenia 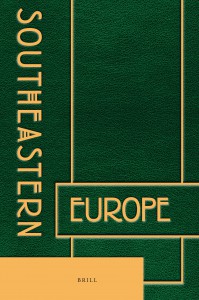 The journal South Eastern Europe published an article by M. Pajnik, Ž. Vodovnik, B. Mance and Ž. Humer entitled »The Shape of Feminism to Come: The Networked Politics of Feminist and lgbt Movements in Slovenia«.

This paper explores the networked politics of feminist and LGBT movements in Slovenia, focusing on the organizational (“actional”) and the thematic (content-related) credo of the movements during the “All-Slovenian Uprisings” of 2012–2013. Analysing the movements’ “repertoires of contention”, we argue that they are driven by cross-movement and cross-issue (i.e. connective) alliances. We identify the presence and/or absence of their interconnection, and explore the content on which the movements focus and around which they generate various forms of activity. The empirical part of the paper analyzes ten relevant feminist and LGBT movements in Slovenia and their online activities using the methods of network analysis. The results confirm the “prefigurative” character of movements, showing how they formulate their agenda in line with their own inner causes, so as to confirm their strategic orientation. The analysis also points to the development of the trans-thematic consciousness that also emerges beyond the thematization of gender and sexual inequality, opening up larger anti-austerity issues.