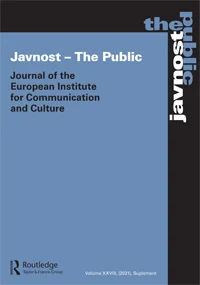 The article Media Populism and Affective Journalism: Newspaper Commentary on the Refugee Crisis by Mojca Pajnik and Marko Ribać examines the production and reproduction of populism in the media reporting and interpretation of migration in the period of transformative changes of the migration and refugee legislation in Slovenia (2015–2019). The authors focus on the presence of three central populist antagonisms that frame the topic of migration in general – people-centrism, anti-elitism, and othering. The specific nature of the dissemination of populist antagonisms in the media requires the authors to consider media populism on two levels; populism by the media presents journalists as generators of populism or as actors who actively engage in the reproduction of populist communication, while populism through the media signifies the presence of populist antagonisms expressed by external voices (e.g. politicians) in the journalistic reporting. These arguments are elaborated in a comparative empirical study of populist and affective communication present in the interpretative genre of newspaper commentary in two selected daily newspapers, Delo and Slovenske novice. The tabloid displays the prevalence of an anti-migration frame coupled with fear, whereas the broadsheet daily Delo frames the topic of migration as criticism of the government in its mostly empathetic communication towards migrants. Examination of similarities and differences in the distribution of populist antagonisms shows the tabloid’s disproportionate expression of populism formulated mostly as a threat of the (migrant) Other.