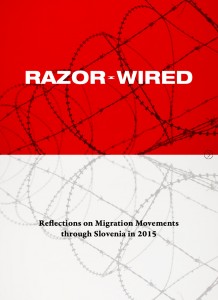 Slovenia’s Response to Increased Arrivals of Refugees: We Don’t Want Them, but We Also Don’t Understand Why They Don’t Want to Stay
Maja Ladić and Katarina Vučko

Migration in the Mirror of Mediatized Anti-Politics
Mojca Pajnik

Refugees, Migrants and Others: The Demand for World Change or How to Think and Understand the Problem of Superfluousness?
Vlasta Jalušič

What Can We Learn from the Current “Migrant Crisis”?
Lana Zdravković

A Note on Contributors

“It is not often that a book is published as an immediate response to a problem, more specifically to the political reaction on refugees coming from war zones in the Middle East. Prompt and reflexive writing demands committed researchers that are involved and not just observe as “objective outsiders”. The authors of this book are themselves included in political debates and practical activities on the boarders. Consequently, they can make analysis also from personal experiences and from different perspectives, which makes the texts especially informative and relevant. It is very important to record and preserve the facts that can so quickly be turned into ideologies, because of the constant attempts to cover up, relocate and mask the truth, to “rationalise” or better racialize the problem. The cooperation between the state, the media, the general public and the politicians in the production of ideologies is tight and orchestrated. Not many voices oppose the growing demands to prevent refugees from passing through Slovenia, yet those that exist are loud and sound. The book is a valuable contribution to that.

Looking at the book from a distance it is clear that its chapters have a common message. It seems that the chaotic manner in which the government responded at the beginning of the mass migrations of refugees, followed by the conscious decision to take up a merely repressive role in the management of refugees, opened the doors for nationalistic sentiment that enabled all sorts of activities against refugees. Most of them including hatred, racism and militarism that is legitimised also by the governments’ lack of action against them.

The book presents the problem from very different perspectives and levels of inquiry, which succeed to capture the complexity of the phenomenon and presents a highly relevant and competent analysis that will provide readers with a deep insight into the structures and processes of current national, international and global power relations. Refugees seem to be collateral damage and the nation state the weakest link. The timely benefit of the book is certainly in preserving proofs, giving evidence and recording facts that will preserve the memory.”
Vesna Leskošek, Associate Professor, Faculty of Social Work, University of Ljubljana

“The time is ripe for us to look into each other’s eyes and admit the truth. In a supposedly civilized world that has not experienced war for a long time, there is more hatred than one would expect, and notably more than is right. Hate speech is percolating slowly from the margins of society to ‘mainstream’ speech. The spirit of our time is to hate and do so time and again. The bearers of hate speech are becoming leaders of political parties and even countries. It is not uncommon that they get support from the media. Civil society, arranged in non-governmental organizations, seems to be the last bulwark of the system, however, the torrent is strong and the dams are on the verge of failing. Hate speech leads directly to hate crimes. We do not have in mind individual attacks that need to be decisively condemned, though. It is about legislation that, due to procedures, has the outward appearance of democracy, yet whose content is, however, in flagrant contradiction to the respect of human dignity. On one hand we are fighting for children and family life, but on the other we are preventing refugee families from reuniting.

The monograph is such an eye-opener that it actually prevents us from shutting them. The Peace Institute as an indispensable participant and initiator of civil actions and, as a critic of inappropriate political responses, is a collective author of a valuable record of times as they should not be. It is warning us about a slow but persistent escalation of a crisis that has been breaking for at least five years. As we have not been paying attention to it and as only individual states were initially affected by human distress and endangered lives that had to be rescued, the burden was considered their own. At present the consequences of this selfishness are being felt all over Europe and Europe has been portrayed as scheming in the short term.

There is a valuable warning that the law needs to adapt to new circumstances, to meet the needs of refugees, and that the existing provisions on human rights need to be the accepted guidance, given the precedence in possible conflicts of legal norms.

The monograph discusses two possible paths – one is to look ‘with eyes wide shut’ when facing these phenomena and the other to become aware that sooner or later these rights and compassion will come to an end for everyone if we do not acknowledge them openly.”
Dragan Petrovec, Full Professor of Criminology at the Faculty of Law in Ljubljana